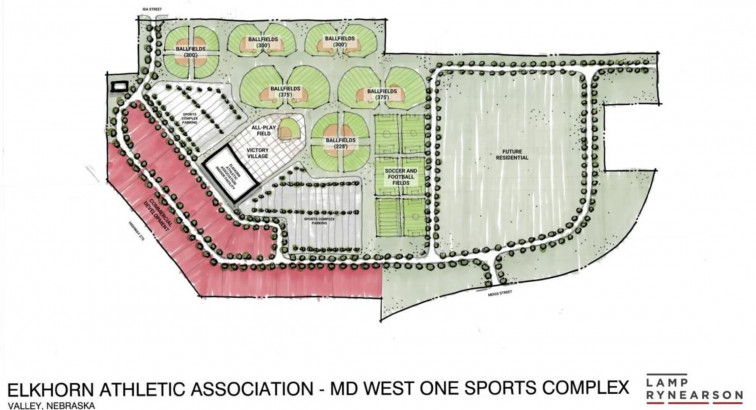 ELKHORN, NE – A new youth athletic complex is breaking ground in Elkhorn, Nebraska. The complex will feature baseball diamonds, soccer fields, a football field, and a track. It is being built to accommodate the needs of the community’s growing youth sports population. The Elkhorn Athletic Association has started construction on a $55 million sports complex that will attract regional tournaments.

There are nearly 11,500 sports complexes around the U.S., and they raked in an estimated $1 billion dollars in 2019 alone. Growing communities like Elkhorn are in need of additional fields to better serve their rapidly expanding population.

According to the executive director of the group, the sports complex has been in the making for at least three years.

The first stage of the project will include eight synthetic turf baseball and softball fields, six synthetic turf soccer/football/lacrosse fields, as well as a barrier-free field for youngsters with special needs. It also has infrastructure for convenience shops, restrooms, and parking.

The youth athletic complex will also feature facilities for families, such as walking trails, playgrounds, and picnic areas all year.

Recreational activities account for more than 70% of the Elkhorn Athletic Association's programming. The facility will not be used by just one group. Other clubs and organizations will use the fields as well, according to O'Neel.

Officials expect the development to produce between $35 million and $55 million in sales tax income each year, according to Fox.

Nebraska Realty President, Andy Alloway, is excited about the economic impact it would bring to businesses and homeowners in the Elkhorn community.

Work is expected to begin on the youth athletic complex in Elkhorn this summer and finish in the spring of 2024.